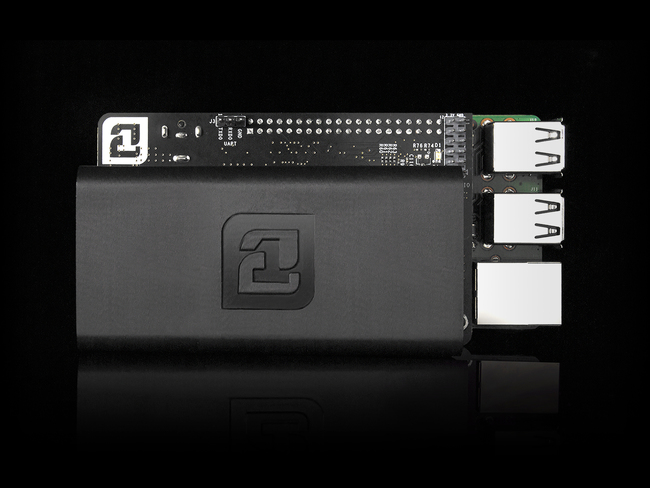 It’s…. A $400 glorified Raspberry Pi with a shitty mining chip glued on top.

The real target cost is pennies, not dollars, not hundreds of dollars, certainly not $400.

The idea is to embed the new chip in smartphones, tablets, routers, everything. (Which is why Qualcomm & Cisco are involved.)

Drop the chip, embed the design in SoC’s and we’re talking single pennies.

The “computer” is not a Bitcoin miner, it’s a platform prototype.

A devkit for future devices which would have native Bitcoin support (wallets & coin-generation) for identification (private keys), and micro-transactions.

But who needs that? We all do!

Advertising is the life blood of internet companies. Partly, because we lack microtransactions. Google & Facebook & Twitter are advertising companies.

There are two alternatives to advertising for media companies:

Content is being indirectly monetized, through cookies, and trackers and beacons, selling your personality, preferences, interests, and the fingerprint of your soul. Your personality is then traded and shared, among the hundreds of companies which follow your digital movements. Example: 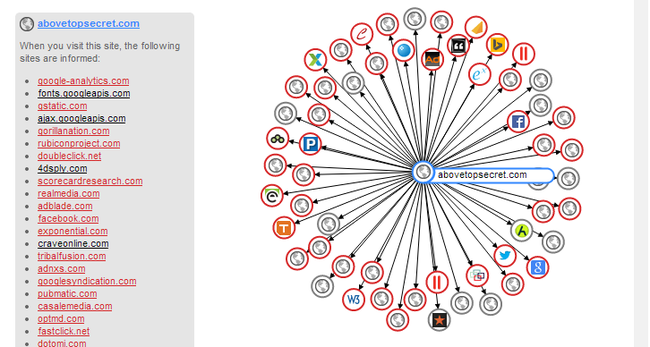 Someone, somewhere is willing to pay, to show you what they want you to see, instead of what you wanted to see. The online experience is about the needs of the advertiser instead of the guy with the eyeballs.

Infernal specimen, for your consideration: 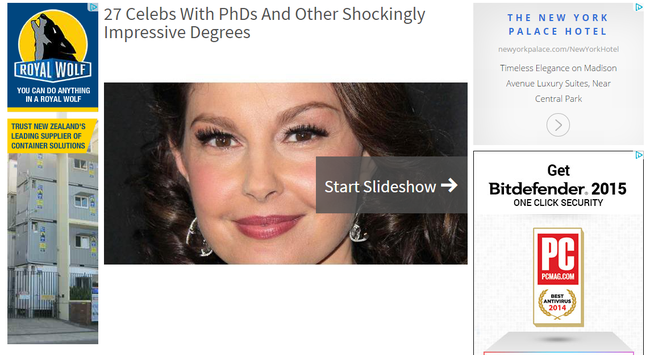 Yikes! Everything is free, nothing is good, you are the product.

Welcome to user experience hell. This is the internet of 2015. This is broken.

The internet runs on advertising. 21 can change that.

You see, websites need to punish you for blocking ads and disabling trackers. Failing that, their business just became a charity. Have you tried browsing without javascript, with adblock, with cookies disabled, with anti-tracking browser plug-ins?

Commercial websites flat out stop working. So you have to disable your defenses. Just allow this one tracker, and this here piece of javascript, and so on, to get the sweet content, and with that, they’re right back in.

But without adverts, journalists and editors starve.

So there is no alternative to war. Or… is there?

Opt in to micropayments. Opt out of tracking and ads.

Pay for content, end the war, get a clean internet experience.

And you don’t pay with cash, you pay with power.

Are you going to notice those extra watts?

And… *waves hands* You just killed:

And removed a ton of hassle and frustration and waste.

Give every internet user a source of fresh, unbought, newly generated Bitcoins → enable e-commerce without logins and sign-ups.

You will become your private keys.

Imagine buying a digital newspaper, in cash, no questions asked.

A product gets delivered.

This is generally impossible on the internet today,

(What is wrong with the world? Why haven’t we fixed this!?)

What we have instead are a bunch of extra steps where customers are absolutely required to have permanent “accounts”.

Want to read the newspaper? Need an account for that.

Even the most minute purchase requires paperwork.

And don’t you just love paperwork?

So all the merchants have databases containing personal data and payment credentials for everyone and keeps them safe for ever and ever. And if someone bad gets your data, they get to buy things from any merchant in your name, and then you have to pay for it.

What we have is a situation where the bad guy is happy and the bank is happy. But merchants and customers are sad and constantly worried. So we see less commerce on the internet than we otherwise would have.

With Bitcoin, there’s no need to keep your data on file for digital payments.

And with that, we can eliminate a lot of identity theft. Yay!

(Corporate and individual victims are grateful.)

Yes, people should have your name and address on file if you buy a house.

But not if you just want to buy a book and read it. Not in a free society.

Why does every online retailer need all your personal data to sell you a digital good? Because of credit cards & identity theft. And advertising.

…to any and every new retailer.

If bitcoin fuels the internet, they don’t need your personal data,

…so they shouldn’t have your personal data.

Today, every service stores all the data for every user.

And you have to trust everyone to keep everything safe all of the time.

As painful experience shows, the status quo is a recipe for disaster.

It’s a liability for everyone. And with Bitcoin, we can fix it.

Bitcoin points the way to an internet without friction between: “I want this digital good” and “I’m enjoying this digital good.” Games, books, magazines, music, livestreams, movies, journalism. Any sort of digital content.

With digital cash for digital content, we can make all online commerce like one-click shopping at Amazon.

If Bitcoin had been there when Tim Berners-Lee invented the Web,

all online commerce would be like one-click shopping at Amazon.

Visit a digital-merchant. “Click to read this article.” Done.

And that’s why you need Bitcoin.

But bitcoin today has more friction than regular old ecommerce.

“The infrastructure isn’t quite there yet.” How fix?

Plug in your bitcoin gadget from 21 or (Cisco or Qualcomm or whatever), and your account starts filling up.

Maybe there’ll be an iPhone/Android app with a nice interface, so you can enjoy watching the numbers go up. Hell, maybe you sometimes pull out your phone to watch the numbers go up at work, or at school. (There are really nice graphs.)

And so you spend some. Perhaps you find that you don’t have quite as much as you’d like, so you go to top off your account somewhere, and you’ve just been onboarded.

And then this chip starts shipping in a few different mass-market devices, and soon those bitcoins you started earning last year are up in value, by like a lot, which is exciting, so you tell your friends, and perhaps a couple of them want one, and suddenly… chain reaction.

Back to the newfangled gadget:

It’s not a Bitcoin miner, it’s the Altair 8800 of the Bitcoin powered internet. 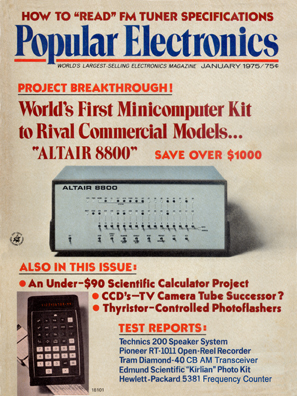 The Altair 8800 was nearly completely useless.

No punch-cards. No disks. No teletype. No screen.

A dud. A turkey. A technological dead-end.

Except it cost four hundred dollars, instead of four-hundred-thousand.

Except it used less power than a city block.

Except it had this new all-in-one chip, the microprocessor. 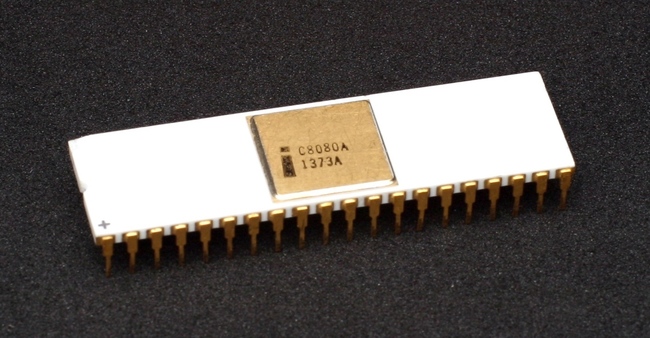 Which made it fit on the desk, instead of filling the room.

And then Bill Gates got one of these useless DIY computers.

And convinced people to pay for their program. (Crazy, right?)

And founded Microsoft. And people started writing programs, and selling them, and so programs turned in to… software.

By monetizing software, something strange happened where people started working really hard to make their software as good as humanly possible.

(And the world went to hell for Richard Stallman.)

But soon, normal people (without extensive training, unusually narrow interests, or extreme IQ) could use computers to actually do stuff. Like spreadsheets, and word processing, and… everything.

So, microcomputers became useful over time.

All this is to say, If you look at the 21 device as, simply, a bitcoin miner.

You could view it as almost completely useless.

And you’re missing the point entirely.

What can a microcomputer do that a nice big-iron mainframe can’t do better and faster? Nothing, or everything, depending on your point of view.

The new device is not about mining coins in bulk.

It’s not about you mining coins to sell on Bitstamp or something.

Like the first microprocessor devices, it’s an expensive and useless toy.

Give it time and it will be cheap, useful, and ubiquitous.

Perhaps, eventually, inside everything.

Bitcoin in every device, by default.

Most don’t look like computers, but instead like TVs and cars and cell phones and toasters and dish washers and stuff.

Will gadgets and software in 40 years will be Bitcoin compatible?

This is clearly undecided, but it does seem to be on the table.

That whole Bitcoin powered internet we talked about earlier.

It doesn’t exist yet. It’s merely a possible future.

Won’t happen unless people roll up their sleeves and make it happen.

But if you ever dreamed of fixing the internet.

Or being the next Bill Gates, or something.

What if, instead of simply building more computers, we use bitcoin as the economic lubricant to utilize the unused capacity in hundreds of millions of computers running on idle in homes, schools, offices and datacenters. My first blog... Continue →